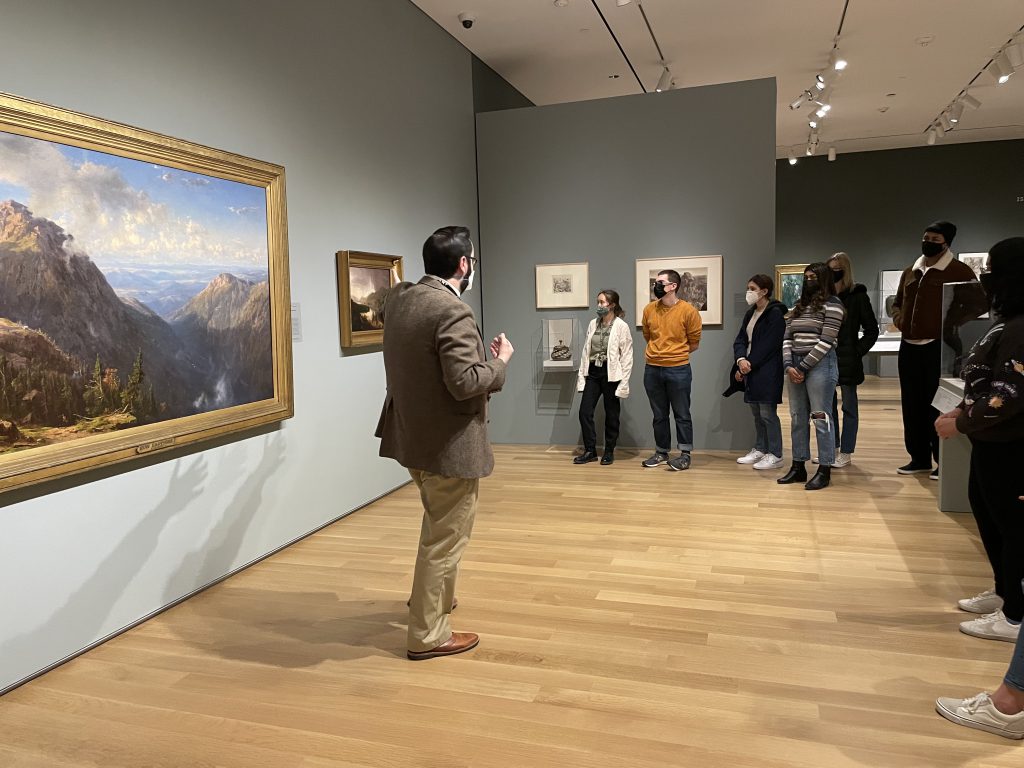 Last September, DELPHI ’21 fellow Michael Hartman began a full-time position as the Jonathan Little Cohen Associate Curator of American Art at the Hood Museum of Art at Dartmouth College. And his new role has altered the course of his dissertation, and by extension, his DELPHI project.

Before participating in the two-week program of the Delaware Public Humanities Institute, Michael had originally proposed to create an Instagram account where he would post artworks related to his dissertation alongside short and accessible captions. However, his experience at the Hood Museum influenced him to do a project that would reach a wider audience in the community. And today, we are delighted to show glimpses of the Hood Museum’s exhibition, This Land: American Engagement with the Natural World, which Michael co-curated.

“[Curating the exhibition] was challenging, because my dissertation focuses on artworks made or displayed in eighteenth-century Maryland or Virginia. My New England institution has nothing from these regions,” the Art History doctoral student recounted. But Michael did not see this as a limitation; rather, he used this as an opportunity to apply some of the theoretical and methodological frameworks from his dissertation to artworks already on display.

“Over the course of an hour, I engaged a public audience on the topic of enslavement in relation to the exhibition.” Of the exhibition’s six subsections, Michael focused on three: Knowing Nature; Sustenance; and Expansion, Encounter, and Exchange. Each of these sections provided an opportunity to complicate traditional art historical narratives while telling a more nuanced story of how enslavement as an institution impacted American art. He used artworks on view to discuss how enslaved people made these objects; how their stolen labor paid for these objects; or how they were responsible for cleaning, serving, and using them, as well as their roles in bringing an end to slavery in the United States.

The public gallery talk started with John James Audubon’s Birds of America, which Michael presented by acknowledging how Audubon—an enslaver—came to know the natural world through the assistance given by Indigenous and enslaved people not credited in his writings. He then pivoted to a discussion of how mahogany logged by enslaved people in the Caribbean was transformed into a table by a Boston cabinet maker.

“We then spent time looking at a silver tea set on top of this table that was owned by Dartmouth Alumnus, Daniel Webster, but cared for by Paul Jennings, a man Webster purchased and freed. Jennings was integral to the anti-slavery movement in Washington, DC, and we discussed his life alongside Robert Duncanson, a Black painter who was never enslaved, but who was heavily involved in Cincinnati’s anti-slavery movement.” He and the visitors also talked about David Drake, an enslaved potter, before concluding with a discussion of an 1820s painting by Thomas Cole. Painted in New York, the canvas was first purchased by an “investor” named Henry Ward. A few years before purchasing this canvas, Ward advertised in New York newspapers as a merchant selling cotton. Michael emphasized that not only did this painting contribute to the forming concept of Manifest Destiny (the removal of Indigenous people from the land and concurrent expansion of slavery), but it was paid for by a man who made his money reselling goods cultivated by enslaved people in the southern United States. The exhibition ended with a discussion of how the American Art market in New York cannot be divorced from the institution of slavery in the antebellum era. “We also acknowledged how our inherited histories—and art histories—are more complicated and entangled than we have traditionally understood,” Michael added.

“The audience was engaged and inquisitive, and in the days following the event, two individuals reached out to me for more information about the topic. One asked if it would be offered again.”

Michael acknowledged the support of the NEH and other DELPHI funders, as well as the facilitators, for creating this wonderful program.

To learn more about the Hood Museum’s exhibition, This Land: American Engagement with the Natural World, click the link below:
https://hoodmuseum.dartmouth.edu/events/event?event=66224.

DELPHI 2022 launches at the end of this month.