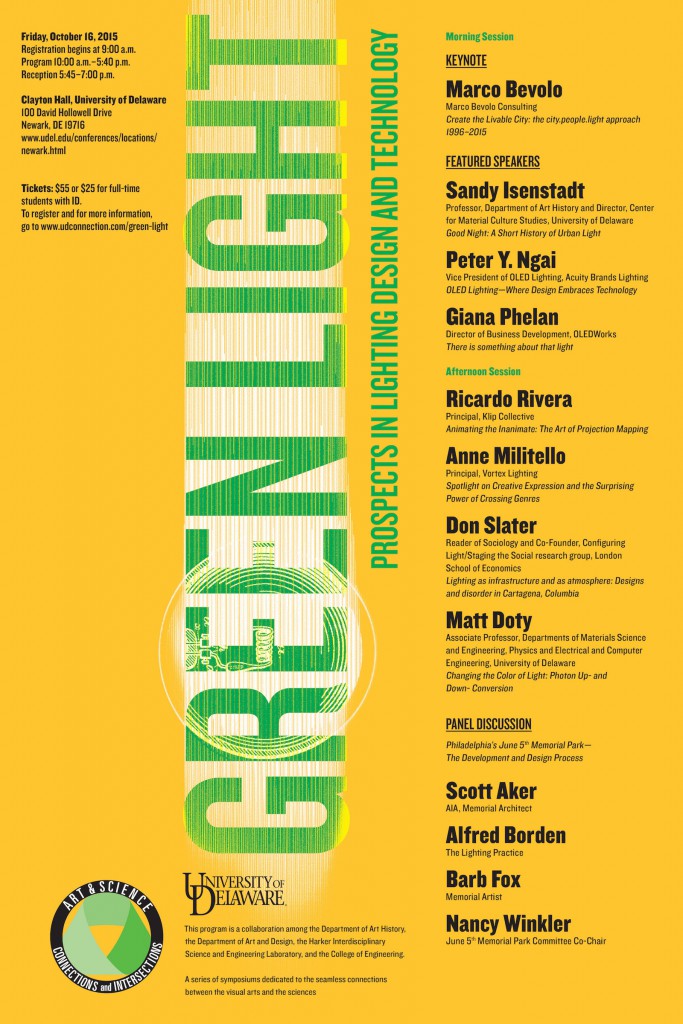 For over a year, the Center for Material Culture Studies has helped develop the program of Art & Science: Connections and Intersections. This initiative works to bring together scholars from across the UD campus. A major part of this initiative was Green Light: Prospects in Lighting Design and Technology. The symposium took place on October 16, 2015, and went above and beyond in meeting the initiative’s goals. Green Light was the result of a collaboration between the Department of Art History, the Department of Art and Design, the Harker Interdisciplinary Science and Engineering Laboratory, and the College of Engineering.

Marco Bevolo delivered the keynote address, “Create the Livable City,” about the approach taken by Philips Lighting’s city.people.light project from its beginning in 1996 through this year and will also discuss new trends. The international city.people.light award was created by Philips and the LUCI (Lighting Urban Community International) Association to recognize cities, urban planners, architects and lighting designers for projects that maximize sustainability and make cities more livable.

In his address, Bevolo presented the latest results of research that he and Lighting Design Collective founder Tapio Rosenius conducted on behalf of Philips. Researchers conducted a three‐year study involving more than 200 European architects, urban planners and academics, as well as other leading professionals from architectural firms and design programs.

Sandy Isenstadt, professor of art history and director of UD’s Center for Material Culture Studies, gave a talk titled “Good Night: A Short History of Urban Light.” Isenstadt teaches the history of modern architecture and is the co-editor of the 2015 book Cities of Light: Two Centuries of Urban Illumination, the first global overview of urban lighting. His current book project, The Architecture of Artificial Light, examines the novel luminous spaces introduced by electric lighting.

Peter Y. Ngai, vice president of OLED lighting at Acuity Brands, spoke about “OLED Lighting: Where Design Embraces Technology.” OLED (organic light emitting diode) technology creates new possibilities in design because of its unique characteristics. Ngai, a pioneer in OLED lighting who holds more than 70 patents related to lighting design, technology and applications, explored how this technology can support designs that are functional, aesthetically pleasing and in touch with our emotions.

Giana Phelan, director of business development for OLEDWorks, spoke on the subject “There Is Something About That Light.” Phelan collaborates with a highly varied mix of customers, including furniture makers, car manufacturers, contractors and architects. She discussed the growing use of OLED lighting and the way that people who experience it for the first time often have a positive emotional response, feeling that the light is drawing them in and making them want to engage in it.

Ricardo Rivera gave a talk titled “Animating the Inanimate: The Art of Projection Mapping.” A visual artist, filmmaker and a pioneer of the technique of video projection mapping, Rivera is a UD alumnus from the Class of 1998 and a founder of Philadelphia’s award-winning Klip Collective. In his talk, he discussed examples of his work, including Nightscape: A Light and Sound Experience at Longwood, and described how projection mapping brings a rigid landscape to life with light and motion.

Anne Militello, the founder of Vortex Lighting in Los Angeles and head of lighting programs at the California Institute of the Arts, spoke about “Spotlight on Creative Expression and the Surprising Power of Crossing Genres.” She approaches lighting design as a holistic practice and is a renowned stage and architectural lighting designer and fine artist. Militello has designed for Broadway, concert touring productions and international opera stages, as well as working at Walt Disney Imagineering.

Don Slater, reader of sociology and co-founder of the Configuring Light/Staging the Social research group at the London School of Economics, spoke on the subject “Lighting as Infrastructure and as Atmosphere: Designs and Disorder in Cartagena, Colombia.” His research group studies how designers and users configure light as a material into the infrastructure of everyday life and built environments and how designers and social researchers can work together for better understanding.

Matt Doty, associate professor of materials science and engineering at UD, presented a talk titled “Changing the Color of Light: Photon Up- and Down- Conversion.” Doty described this conversion process, in which materials can absorb photons of one color and emit photons of a different color, and then discussed his efforts to develop new materials that implement up-conversion in order to improve the efficiency of photovoltaic energy harvesting and solid-state lighting.

Capping the day’s events was a panel discussion among those responsible for executing Philadelphia’s June 5th Memorial Park, a project to honor the six lives lost in the collapse of the Salvation Army store on June 5, 2013. Nancy Winkler, co-chair of the project, Alfred Borden of The Lighting Practice, memorial artist Barb Fox and memorial architect Scott Aker discussed their interdisciplinary, collaborative process.

Green Light was one of many projects to come out of the Art & Science: Connections and Intersections initiative.