Welcome, undergraduate students! Below you’ll find a list of the latest course offerings at UD that engage significantly with material culture. Don’t forget to check out the amazing grant opportunities sponsored by CMCS. Note: the Center is currently reviewing the status of the Material Culture Studies Minor; new MCST minors are not being accepted during this time. 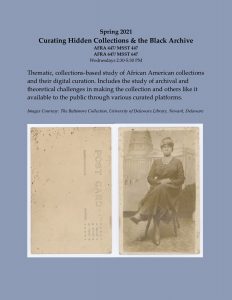 Thematic, collections-based study of African American collections and their digital
curation. Includes the study of archival and theoretical challenges in making the collection and others like it available to the public through various curated platforms.

ANTH 105 — Archaeology of the Modern World
Professor DeCunzo
An introduction to the methods, practice, and foundations of historical archaeology as well as to how historical archaeology can study and has interpreted the modern world.  Introduces students to the emergence and evolution of the modern world through a discipline that is global in scope, theoretically and methodologically diverse, and highly interdisciplinary.

ANTH 218 — Solving Archaeological Mysteries
Professor Neitzel
Considers how archaeologists study ancient societies and the relevance of their research to the contemporary world. Case studies from the U.S. American Southwest are used to examine major questions, methods, and findings. Current issues include the impacts of climate change, cross-border migration, racial justice, cultural heritage preservation, and controversies with indigenous descendants about the proper treatment of ancestral burials and sacred sites.

ANTH 229 — Indians of North America
Professor Custer
Provides an overview of North America’s indigenous peoples. Emphasis on understanding Native American cultures just prior to and during the early phases of their disruption by European Contact.  Separates what we “think we know” about American Indian people from what is “truly known.”

ANTH 232 — Anthropology of Global Youth
Professor Neitzel
Joins American and International students in mutual learning about cultural similarities and differences as young, privileged, and connected citizens of today’s globalized world. Students teach each other about their lives and cultures with the goal of generating deeper cross-cultural understanding and interaction.

ANTH 320 — Prehistory of North America
Professor Rocek
Examines cultural variation and the evolution of Native American cultures from initial Native settlement until European contact. Topics are organized around a cultural evolutionary and ecological approach, stressing changes in adaptive patterns and cultural variation over time and among groups. 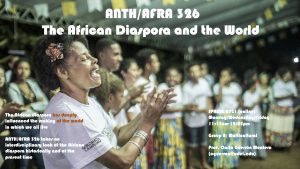 This course studies the historical, geographical, and cultural specificities of cultures in the African diaspora; the continuities and connections within the African world experience, and the historical specificity of each culture under its rubric. Topics addressed include history and geography of the African diaspora; rebellions and revolutions; the ‘big thinkers’ of the African Diaspora; cultural manifestations such as music, cuisine, and art; discourses of whiteness, and ways to remember the Motherland.

ANTH 344 — Anthropology of Clothes
Professor Thomas
Study of clothes in cross-cultural perspective. Uses anthropological perspective to examine varying standards of beauty worldwide and impact and reflection of clothes on other aspects of culture (e.g., economics, politics, gender, religion). Causes and consequences of changing styles of dress through the topic of globalization.

ANTH 381 — Visions of Native Americans
Professor Custer
Critically examines the visual images of Native Americans that have been created in films, photography, commercial art, and media and analyzes how those images function in Euroamerican culture to perpetuate destructive racial stereotypes. 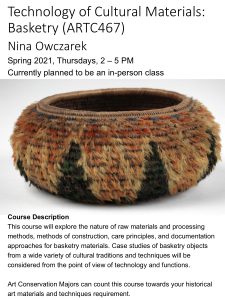 Professor Owczarek
This course will explore the nature of raw materials and processing methods, methods of construction, care principles, and documentation approaches for basketry materials. Case studies of basketry objects from a wide variety of cultural traditions and techniques will be considered from the point of view of technology and functions.

Art Conservation Majors can count this course towards your historical art materials and techniques requirement.

ARTH 402 — Depicting Race in Black Art
Professor Okoye
Students will explore differential depictions of racialized worlds in diasporic Black culture, via a contextualized comparison of the art of modern and contemporary African Diaspora in the Americas, Europe, and Asia.

FASH 214 — Development of Fashion: Ancient World to 1600
Professor Lopez-Gydosh
Clothing as a mirror of civilization in Western Europe and the Middle East from antiquity through the 16th century. Influence of societal, economic and aesthetic factors upon the development of clothing.

FASH 319 — Dress and Textiles in World Cultures
Professor Lopez-Gydosh
Examination of similarities and differences in the dress of culturally distinct groups: analysis of functions served by dress and textiles factors influencing changes in cultural forms of dress.

MSST 401 — Curatorship and Collections Management
Professor Cohen
Introduces students to the best practices of collections management: the storage and organization of both digital and physical collections. Through readings and in-class workshops, students will learn to remediate threats to collections from handling temperature, humidity, light, and infestation. In addition, the semester-long project will involve building and managing collections management databases and digital catalogs that have become central repositories of curatorial knowledge and public access to art and artifacts.

UAPP 428 — World Heritage Sites
Professors Reedy
Goals and political context of UNESCO’s World Heritage program, UNESCO activities related to that program, process of nomination of new sites for the World Heritage List, and cultural and preservation issues presented by world heritage sites in a variety of regions and countries.

UAPP 430 — Methods in Historic Preservation
Professor Morrissey
Introduces students to the critical skills and methodologies employed in the field of historic preservation. Organization is based on the steps used in preservation planning, including survey and identification of historic resources, evaluation of significance, development of historic context, and creation of preservation treatment alternatives.

ANTH / HIST / MCST 216 — Introduction to Material Culture Studies
Professor DeCunzo
This course introduces you to the rich potential of the material world to provide insights into American culture. We will explore what material culture scholars from diverse disciplines and backgrounds study, how they study it, why they study it, and what they have learned from it.

ANTH 229 — Indians of North America
Professor Custer
An introductory comparative study of Native American cultures as they existed prior to their disruption by European contact.

ANTH 236 — Anthropology of Sport
Professor Galarza
This class examines the connections between the cultural practices surrounding soccer, the world’s most popular sport, and the political meanings and effects of the game. Soccer offers a lens for studying things like capitalism, power, identity, gender, race, and migration (amongst many other issues). Students will learn how to do ethnographic and archival research, how to critique and analyze data, and how to think critically about the study, meaning, and culture of soccer.

ANTH 324 — Old World Anthropology
Professor Rocek
The course surveys world prehistory, excluding the Americas, from the origins of hominids to the appearance of states.  This survey is used to introduce concepts of biological and cultural evolution, and variation in technological, economic and social complexity. We begin with an introduction to method and theory in archeology, and then proceed chronologically through the sequence of cultural development.

ANTH / MSST 463 — Historical Archaeology and the Public
Professor DeCunzo
This course examines historical archaeology in the public arenas of cultural resource management, museum and historic site interpretation, and community history.  The seminar addresses issues of archaeological philosophy, practice, and pedagogy through readings, discussion, and projects in public archaeology.  It prepares you to engage the academic-public discourse relating to the construction, dissemination, and contesting of archaeological knowledge.  To accomplish this, we address the range of issues facing public archaeology, from the values and challenges of critical scholarship to the logistics of using historical archaeology for public advocacy.

ARTH 399 — Art of the Vote
Professor Hill
With one eye on the 2020 presidential election and the other on the social, cultural, and material histories of voting and the fight for the franchise in America, we will collectively consider the role of art, media, and material culture as these have worked to shape American political life via that civic work of voting, with a focus on the period since 1900. Participants will consider a wide range of cultural materials ranging from historical televised debates and campaign advertisements to editorial cartoons, photojournalism, posters, ballots and ballot boxes, monuments, Hollywood and documentary films, and works of modern and contemporary art, as these have variously engaged with both the often-divisive politics of presidential elections and the wider American struggle for voting rights.

ARTH 413 — Art in the Age of Exploration
Professor Domínguez Torres
Examines a variety of European images and objects produced during the so-called Age of Exploration-the period from mid-fifteenth to the seventeenth century when Europeans navigated around the globe in search of new lands, goods, and trade routes.

UAPP 429 — Historic Preservation Theory and Practice
Professors Morrissey & Reedy
Analysis of the theory underlying historic preservation in the United States and globally, including its history and evolution over time. Examines the impact of preservation laws and public policies, and the strategies and regulations for identifying significant structures, sites, and cultural heritage worthy of preservation.

WOMS 324 — Feminism and Sexualities: Oscar Wilde, Women, and Sexualities
Professor Stetz
Among other goals, this course will introduce students to the world of objects (such as fashion designs) inspired by Oscar Wilde, and it will include a “virtual” visit to the Mark Samuels Lasner Collection at the UD Library, with its extensive holdings of photographs, drawings, presentation copies of books, watercolors, printed ephemera (such as theater programs), and other items related to Wilde and his circle.

ART215 — Seeing and Being
Professor Cox

ENGL 361-011 — Digital Cultures: How To Read the Internet
Professor Wasserman