As a part of the conference “Sea Sense: Blue Humanities and the Early Modern Imaginary,” Professors Julian Yates and Jeffrey Jerome Cohen were interviewed about their book in progress on Noah’s Ark. 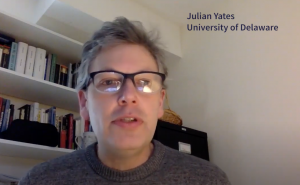 The conference was co-organized by the University of California, Irvine’s Center for Early Cultures and The New Swan Shakespeare Center. “Sea Sense” focused on the narrative and representational aspects of early modern land/sea distinctions and the environmental concerns these distinctions foreground. The conference explored the allegorical and rhetorical role oceans play in early modern conceptions of environmental catastrophe, and the limits and possibilities that oceans presented for thinking with ecocriticism in a deep historical context.