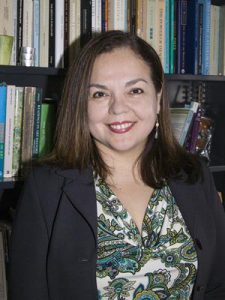 Professor Domínguez Torres specializes in Renaissance and Baroque art in the Iberian World, with particular interest in the cross-cultural exchanges that took place across Spain and the Americas during the period 1500-1700. She received a B.A. in Art History from the Universidad Central de Venezuela, a Masters in Museum Studies and a Ph.D. in the History of Art from the University of Toronto, Canada. Since 2005, she holds a joint appointment in Latin American and Iberian Studies. Her book Military Ethos and Visual Culture in Post-Conquest Mexico (Ashgate, 2013) investigates the significance of military images, symbols and insignia in sixteenth-century Mexico, showing how certain interconnections between martial, social, and religious elements resonated with similar intensity among Mesoamericans and Europeans, creating cultural bridges between these diverse communities. With Professor Wendy Bellion, she co-edited Objects in Motion: Art and Material Culture across Colonial North America (2011), a special issue of the journal Winterthur Portfolio featuring papers presented at an international symposium they organized at the University of Delaware in 2008.

Her current book-length project, Pearls for the Crown: European Courtly Art and the Atlantic Pearl Trade, 1498-1728, examines a selection of courtly images and objects related to the Spanish pearl industry in connection with the interplay between materiality, labor, and consumption that drove artistic production in the early modern period.