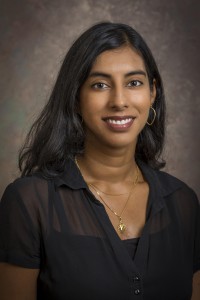 Keerthi Potluri specializes in urban studies and social and political thought. Her research focuses on the construction of cities, memorials, and public space, mostly in North America, and she has published writing on urban parks and waterways. Her current work explores the parallel design of the state alongside urban public spaces through discourses of the public good, ethics, and memory at sites that include the World Trade Center memorial plaza, a New York City bus depot, and Freshkills Park in Staten Island.
Prior to joining Delaware, she held research positions at New York University and the University of Pennsylvania. Alongside her academic work, she has developed communications strategies for the ACLU and the Central Park Conservancy. She received her MA and PhD in Rhetoric from the University of California, Berkeley.