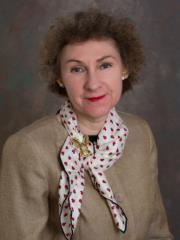 Margaret D. Stetz is the Mae and Robert Carter Professor of Women’s Studies and Professor of Humanities at the University of Delaware. She received her BA (summa cum laude) from Queens College, the City University of New York; her MA from the University of Sussex, UK; and a second MA, as well as her PhD, from Harvard University. Before joining the UD faculty in 2002, she taught at the University of Virginia and at Georgetown University. Her teaching interests include women and material culture, women’s representations of war, women’s comedy, and late-Victorian feminism. As well as being author of books such as British Women’s Comic Fiction, 1890-1990 and Facing the Late Victorians, and co-editor of volumes such as Legacies of the Comfort Women of WWII and Michael Field and Their World, she has published more than 100 essays, which have appeared in journals ranging from Victorian Studies to the Journal of Human Rights Practice. Among her recent essays (published in 2018) are “Neo-Victorian Laughter: A Genealogy” in the Journal of Neo-Victorian Studies, UK; “Re-embodying Ida B. Wells: A Figure of Resistance in American Popular Culture” in Americana: Journal of American Popular Culture; and “The Other Love That Dared Not Speak Its Name: Wilde’s Jewish ‘Fans’ in World War II-Era Cinema” in the edited volume Wilde’s Other Worlds (Routledge). She has been curator or co-curator of thirteen major exhibitions on gender, visual arts, literature, and print culture at venues that include the Henry B. Plant Museum (Tampa, FL); the National Gallery of Art Library (Washington, DC); Houghton Library, Harvard University (Cambridge, MA); Liverpool Central Library (Liverpool, UK); Bryn Mawr College Library (Bryn Mawr, PA); and the Rosenbach Library and Museum (Philadelphia, PA). She has delivered many invited guest lectures at universities around the world, including Trinity College, Oxford University; Cardiff University; the University of Geneva, Switzerland; Ewha Women’s University, Seoul, South Korea; the University of Limerick, Ireland; and Keio University, Japan, as well as at public humanities events such as the Ibsen Festival, Bergen, Norway. She is also a member of the editorial boards of a number of journals, such as Victorian Literature and Culture; Victorian Periodicals Review; Papers on Language and Literature; and Nineteenth-Century Studies, along with the editorial boards of several scholarly monograph series, such as the “Gender and Genre” series (Routledge) and “Nineteenth-Century Writing and Culture” (Palgrave Macmillan). In 2015, she was named by Diverse: Issues in Higher Education magazine to its list of the top 25 women in higher education. In spring 2017, she was a recipient of a Korea Foundation fellowship, selected by the Republic of Korea’s Foreign Ministry to represent the United States as a “distinguished academic” and to visit Seoul for the purpose of cultural and educational exchange.