Debra Hess Norris, the Unidel Henry Francis du Pont Chair in Fine Arts and the chair of the Department of Art Conservation at UD, has received the 2016 award for distinction in scholarship and conservation. Norris was nominated by not one, but two leadings organizations: the College Art Association (CAA) and the American Institute for Conservation (AIC).

In their announcement of Norris’ win, the CAA wrote, “Debra Hess Norris has perhaps done more than any single individual in the 21st century to further the cause of preservation of cultural heritage both nationally and internationally.” Both the CAA and AIC highlighted Norris’ dedication to advocacy and public outreach, training future leaders in the field, and ensuring the international reach and global scope of her teaching and conservation wok. 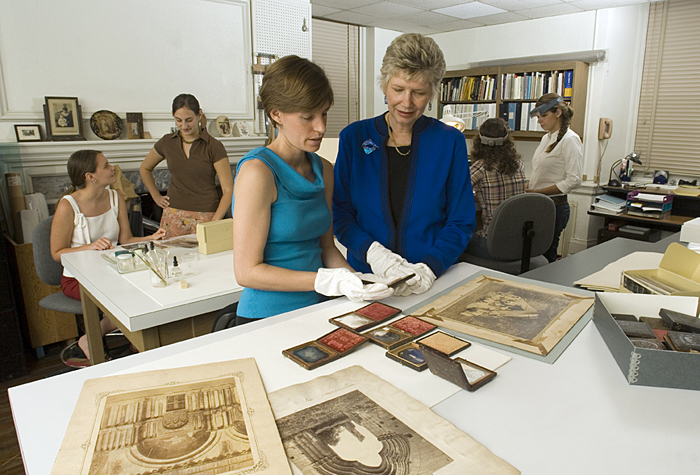 Debbie Hess Norris with some of her students from Art Conservation class at the University of Delaware. 8/31/05

When Norris received her MSC in conservation from the University of Delaware in 1980, there were only five conservators in the burgeoning field of photography conservation. With Norris’ leadership, that number has now increased dramatically, with more than half of photography conservators having trained under Norris. In her acceptance speech, Norris spoke about her deep love of photography and its connection to memory and the human spirit, as well as her sincere admiration for her students – a combination that has made her a mentor for so many.

Over the span of her career, Norris has organized more than 145 workshops on the topics of photography conservation, disaster recovery, and global preservation issues more broadly. Norris has focused on the ethics of conservation, which culminated in her book Code of Ethics and Guidelines for Practice and positions such as US commissioner to UNESCO.

Norris’ work reflects her core values: to combine global engagement with scholarship, teaching, and service. Norris has helped to create and develop such initiatives as the Iraqi Institute for the Conservation of Antiquities and Heritage (IICAH), the Middle East Photograph Preservation Initiative, and many more. She has also been at the head of disaster relief for events such as Hurricane Katrina.

The Center for Material Culture Studies extends its sincerest congratulations to Debra Hess Norris for this well deserved accolade.