With support provided by the National Endowment for the Humanities, fourteen ten-week summer fellowships were awarded to MA and PhD students in the arts, humanities, and social sciences pursuing research in material culture studies, broadly defined here to include the conservation of objects as well as the scholarly investigation of relationships among people, material processes, and objects. Fellowship recipients will participate in a two-week Institute from May 29 – June 8, during which they will learn a variety of skills for engaging non-specialists through public speaking and digital media. Over the course of the summer, participants will work on projects related to material culture studies, preservation studies, and conservation studies. Learn more about the participants and their projects below. 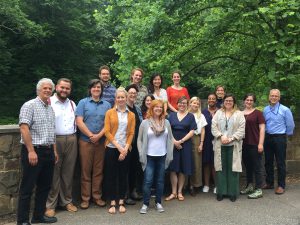 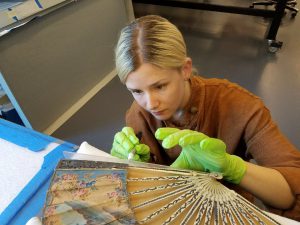 Madison will spend eight weeks this summer at the Fine Arts Museums of San Francisco (FAMSF). Her internship will be based in the paper conservation lab, and will include exhibit installation experience and the treatments of several prints and drawings from the Achenbach Foundation for Graphic Arts. Madison will be writing a blog post for the Museums about the exhibit installation during the summer, and gaining preventive conservation experience to share during the fall in a public workshop on the preservation of paper-based collections at home. 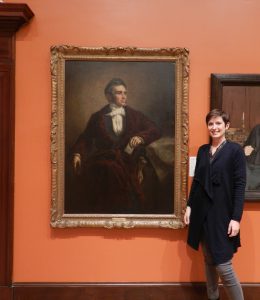 Alba’s dissertation “Artistry and Industry:  studies the work of portrait artist George Peter Alexander Healy (1813-1894) and his investment in industrialization, attending to both the faces of industrialists he painted and to his own values, which epitomized principles at the core of industrialization. His often repetitive and highly  successful portraits constitute a fascinating world of private and public identities, social networks and commercial transactions. This summer, Alba will travel during a four-week period to various major U.S. institutions that hold archival material regarding Healy’s life and work. 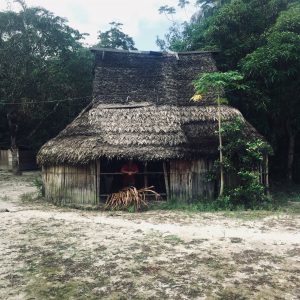 For indigenous cultures around the world, artifacts, images, music and rituals are seen as storytelling tools that advance belief systems and develop cultural identity. Camilo’s research project, “Shaman as Artist”, analyzes the views and practices of shamans in the Colombian Amazon in search of potential parallels with contemporary art. By highlighting the commonalities in these seemingly different practices, this project aims to broaden cultural awareness of indigenous peoples and the fundamental ways in which we connect as humans. Observing the creative output of indigenous communities is an opportunity to broaden our current perception of what art and art-making can accomplish for society, given that their creations are central to the spiritual, physical and political advancement of their communities. This research project will culminate with a series of short films and a body of sculptural works. 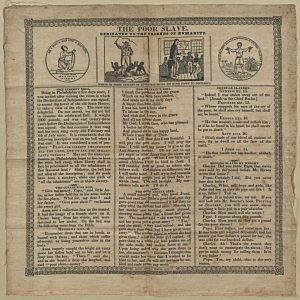 Jessica Conrad is building a digital humanities project called Activist Artifacts that showcases print, visual, and material culture of nineteenth-century reform movements in America for the purposes of public awareness and higher education. The exhibit tells the story of nineteenth-century resistance and reform movements through the objects activists made, boycotted, bought, and used—a pin cushion, a silk handkerchief, a root beer advertisement, a newspaper. The project seeks first to bring awareness to a fascinating part of American history, second to make tools available to educators who share an appreciation for material culture, and finally to strengthen public understanding of the power that objects and print have in effecting change. 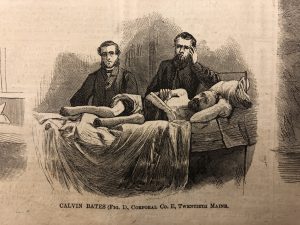 In today’s world, images of police shootings, dead bodies, war, and other graphic imagery often come with trigger warnings, or are censored online and on social media. During the Civil War, however, popular newspapers like Harper’s Weekly did not shy away from publishing all kinds of gruesome images of tortured slaves and wounded soldiers with gangrenous limbs. In her dissertation entitled, “‘Features of Cruelty Which Could Not Well be Described by the Pen’: The Media of Atrocity in Harper’s Weekly 1862 – 1865,” art history PhD candidate Anne Cross investigates how Harper’s used engraved images based on real photographs to communicate the brutality of the war to its Northern audience. This summer Anne will conduct archival research in support of her dissertation, including in the archives of the Harper & Brothers publishing house, located at Columbia University in New York. 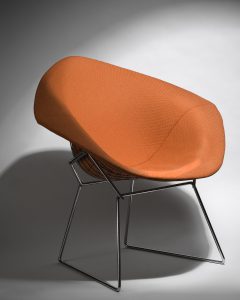 Carrie will spend the summer cataloging and interpreting the mid-century modern furniture at the Winterthur Museum. The furniture including pieces by Knoll, Eames, and Saarinen is currently undocumented and scattered throughout Winterthur’s campus. Carrie hopes that her research will enhance perspectives on how mid-century modernism was and is experienced. 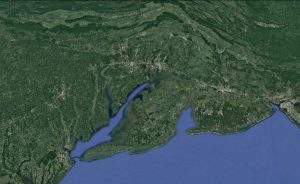 If you have driven I-95 between New York and South Carolina you have been on the fall line. You likely had no idea. The creative destruction of capitalism has a history hidden right under your feet. Innovative technologies grew up along the fall line, the edge where rivers tumble from piedmont to tidewater. They created wealth for some and destroyed traditional livelihoods and economic relations for others. In The Cutting Edge, environmental historian Gregory Hargreaves explains how this process unfolded and reveals why it shaped American industrial development for centuries, right up to the present day. 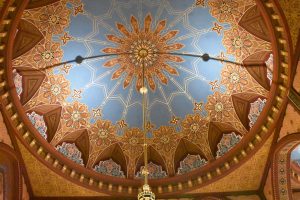 Elizabeth’s master’s thesis investigates the presence of Islamic design in nineteenth-century American architecture. Using the Midwest as a case study, her project works to contextualize the motivations and intentions behind adopting an international style into the American landscape. Additionally, she hopes to identify specific architectural styles and design sources used to design these spaces. This summer, Elizabeth will conduct material and archival research across the Midwest, including several visits to existing architectural sites. Places include Cincinnati, OH, Quincy, IL, Minneapolis, MN,  among others.

Image caption: interior view of Northeast dome. The temple has a cruciform floor plan and is inspired by the Alhambra. Isaac M. Wise Temple (1866), Cincinnati, OH. 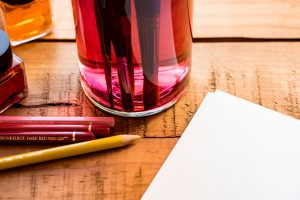 Joanna Hurd is a rising second year graduate student in the Winterthur/University of Delaware Program in Art Conservation. She is specializing in paper with a minor in photograph conservation. Joanna intends to apply her DelPHI training to upcoming engagements with public schools demonstrating the crossover between art and science through art conservation, as well as at her summer internship at Harvard University’s Weissman Preservation Center. 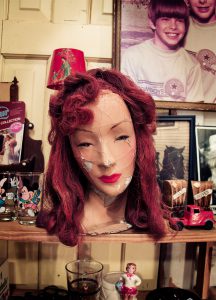 Natalie’s project is called Museum of the Uncanny Familiar  – American Thrift Stores and The Second-Hand Object. It considers that thrift stores are museums of the urban ecosystem, curated by discard. The collections within are an uncanny representation of contemporary culture, a temporary home for wayward goods. These objects are artifacts, hiding a cache of secret narratives waiting to be uncovered. Museum of the Uncanny Familiar is a quest to small-town thrift stores and flea markets to investigate the second life of used objects and the people who desire them. The culmination of this research will be a new body of sculptural and photographic artwork and an accompanying podcast series. Hutchings’ art practice focuses on the Anthropocene, or age of humans, geologically. She explores themes of ecology, consumerism, and waste through the lens of retro-futurism, speculative futurism, and humor. 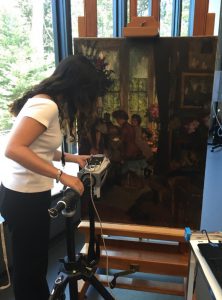 Tracy’s summer as a Paintings Conservation Intern at the Fine Arts Museums of San Francisco involves working alongside senior paintings conservators to treat paintings in the museum’s collection that have aesthetic and/or structural issues making them unstable or unfit for exhibition.  Additionally, Tracy will be aiding Associate Paintings Conservator, Sarah Kleiner, on a technical study of a series of paintings by 19th century artist James Tissot using X-ray fluorescence (XRF) spectroscopy.  This technique allows conservators to understand the elemental composition of any chosen location on a painting without invasive sampling.  By taking XRF readings of multiple pigments across a series of Tissot paintings, Sarah and Tracy hope to gain a better understanding of his pigment palette, the materials he used, and possibly link them to colourmen/suppliers he worked with. 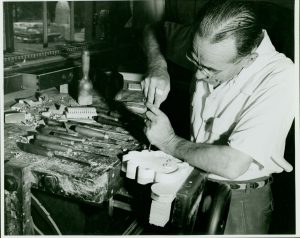 Erica Lome’s dissertation considers reproduction colonial furniture made between 1890-1945. It offers the first full-length scholarly treatment of the reproduction cabinetmaking trade as well as a substantial material culture analysis of these objects from the perspective of their makers and consumers. This summer she’ll be doing research in New England and in Grand Rapids, Michigan. 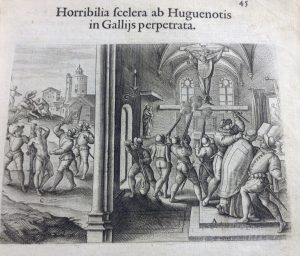 Matthew’s dissertation, “Signs That Save: Sacramental Matter and Agency in Shakespeare’s England,” analyzes the relationship between English literature, material cultures of religion, and sacramental theology during the sixteenth and seventeenth centuries. Matthew argues that the English Reformation is, in part, a rejection of nonhuman agency, and he offers the period’s drama and poetry as a space that interrogates what it means to be a human in relation with material and physical objects (acting) in the world. In July 2018, Matthew will spend three weeks researching in the archives at Oxford University’s Bodleian Libraries. There, he will be examining late medieval and early modern manuscripts and printed texts on theology and ritual worship, iconoclasm and dissection, Reformation-era religious conflict, and alchemy. 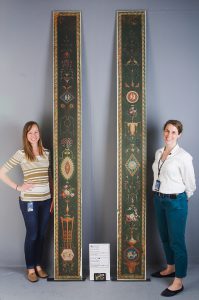 As a second-year graduate fellow in the Winterthur/University of Delaware Program in Art Conservation (WUDPAC), Keara will spend ten weeks at the Saint Louis Art Museum (SLAM) in Missouri.  During her internship, she will work on the conservation treatment of one Arthur & Robert wallpaper pilaster (French, late 18th century).  Over the past two hundred years, this pilaster has collected dirt and grime, tears in the paper, and losses to the designs.  Tears and losses to the paper will be stabilized/filled, and damages to the painted designs will be visually reintegrated.  The SLAM team she will collaborate with this summer includes Hugh Shockey, Head of Conservation (WUDPAC Class of 2002); Claire Winfield, Associate Painting Conservator; Julie Ribits, Assistant Paintings Conservator; and Elizabeth Robson, Graduate Conservation Intern. 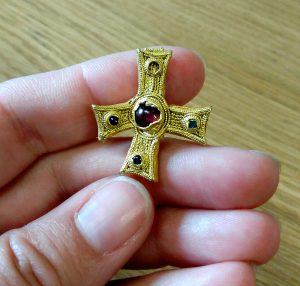 Like many museum pieces, golden cross pendants from seventh-century England are disembodied from the context of their life as things and from the people who wore them. In early medieval England, jewelry forged personhood, memory, and societal structure and operated as amuletic protection. Rachael’s dissertation explores the relationship between cross and wearer, utilizing material culture methodologies to demonstrate how objects change cultural notions about the mind/body relationship, specifically in religious conversion. Through the familiar object of jewelry, the medieval period and its people become more accessible and relatable; its objects are reanimated as experienced things, rather than showpieces behind glass.