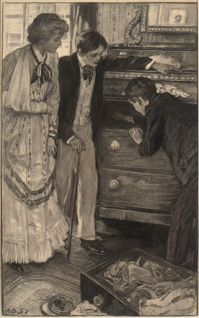 Free for Museum Members or with Museum admission

In conjunction with The Fellowship of American Bibliophilic Societies’ (FABS) Annual Tour & Symposium and The Delaware Bibliophiles, the Delaware Art Museum will hold “Books and Illustration at the Turn of the Century in Britain and America,” a symposium with three speakers. These talks will focus on illustration and book design—a strength of the collections of the Delaware Art Museum and the University of Delaware Library. A tea reception will follow.

A celebrity who has since faded into relative obscurity, Ouida (b. Maria Louise Ramé, 1839-1908) was among the most prolific and bestselling authors of her generation. Adored by her fans but ridiculed by her critics, women and men, young and old, from different social classes, vocations, political parties, and nationalities persistently found something desirable in her stories. One of the clearest indicators of her long-term success was the degree to which her novels had been marketed in cheap reprints and illustrated editions by the turn of the century. This talk will take an in-depth look at a range of illustrations for Ouida’s novels. It adopts a transnational approach to a comparative analysis of specific regional editions and their variant states.

The drawings that Golden Age illustrator Stephens created for the literary classics Middlemarch and The Marble Faun mark a high point in her career. They reflect the impact of her training with leading American and European artists as part of her matured, distinctive and intuitive approach to illustration.

Christina Rossetti’s best-known poem Goblin Market, first published by Macmillan in 1862 with illustrations by her brother Dante Gabriel Rossetti. More than any other poem from the Victorian era, Goblin Market has enjoyed an endless fascination for aritsts and illustrators. This presentation will focus on the illustrations and designs of Dante Gabreil Rossetti in the early 1860s and Laurence Housman’s thirty years later in the early 1890s. Art and illustration from 20th and 21st century editions of Goblin Market will also be discussed: Margaret Tarrant (1912), Florence Harrison (1923), Arthur Rackham (1933), Kinuko Craft (1973), and John Bolton (1984).

This talk is sponsored by the Delaware Art Museum’s Friends of the Helen Farr Sloan Library and by the Mark Samuels Lasner Collection, University of Delaware Library.