Art, Artifacts and Specimens from the Collectors Cabinet 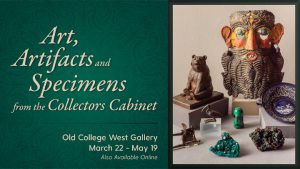 Originally, collectors cabinets were rooms full of various works of art, natural history objects, and antiquities first organized during the Italian Renaissance. Ole Worm, a Danish physician and professor at the University of Copenhagen, assembled the one shown here during the early 1600s. Some cabinets demonstrated the power and wealth of the owner, challenging the viewer to think about the connections among what might today seem to be randomly-arranged objects. Cabinets became a popular way to display objects from travels or items of personal interest. Collectors evolved into curators, classifying and interpreting the wide-ranging collections. In the same fashion, the series of cabinets or rooms of objects were the genesis of today’s museums. This exhibition reflects the legacy of collectors, donors, and curators who had an affinity for or relationship with the University of Delaware.

Friends and Enemies: Whistler and his Artistic, Literary and Social Circles

James McNeill Whistler (1834–1903), the expatriate American artist, had a formidable presence. He was known for his consummate skill as a painter and printmaker, for his radical art theories, for his wit—and for his combative persona that repeatedly led his friendships to devolve into feuds. Whistler’s forceful personality was at odds with the delicacy of his art. His iconic signature of a graceful butterfly with a barbed stinger embodies this contradiction.

Inspiring many and reviled by some, Whistler courted controversy throughout his life.

Friends & Enemies: Whistler and his Artistic, Literary, and Social Circles explores Whistler’s high-profile place in the art world and in the literary and social worlds of Paris and London. Tracing famous controversies, such as Whistler’s lawsuit against art historian John Ruskin and his verbal sparring with Oscar Wilde, the exhibition has at its core an array of Whistler’s etchings and lithographs. Printmaking was central to Whistler’s career and he is considered one of the great masters of etching and lithography. Whistler’s prints and writings are juxtaposed here with works on paper, photographs, books, periodicals, and ephemera by his associates and the followers who helped ensure his long-lasting legacy.