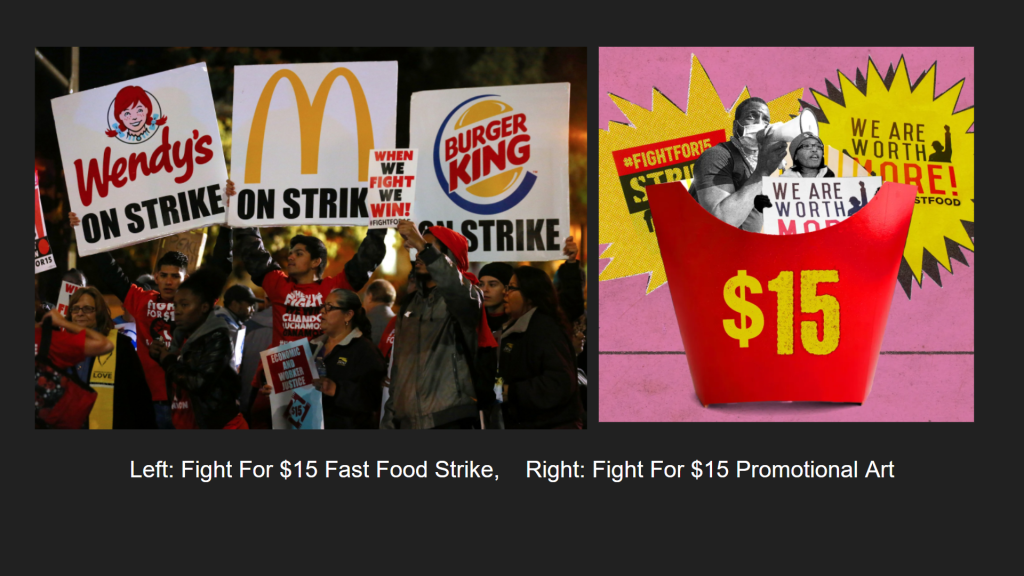 “The material culture of protest is not limited to the protestors.”

Art History doctoral candidate Rachael Vause had a memorable Spring semester teaching the Honors Colloquium, “Objects of Unrest: The Material Culture of Protest.” In this course, she wanted her students to raise the question “what do these things do within the act of protest?”. With this question in mind, Rachael encouraged the students to explore protest as a generative and/or destructive endeavor.

“When the policies of institutions conflict with a community’s freedoms, ways of life, or beliefs, protest is a powerful method for inciting change,” Rachael said in an email interview with the CMCS. “Specific objects sometimes become a defining feature of that protest, such as the umbrellas of the Hong Kong democracy protests, the pink pussy hats of the Women’s March, and the yellow vests of the French protesting tax hikes on fuel. The material culture of protest is not limited to the protestors.”

The “Objects of Unrest” course featured three cumulative assignments: an Object Analysis, a Case Study, and an Action Plan. The aim of the Object Analysis was to get students used to thinking deeply about how objects and the materials from which they are made directly relate to their impact and reception within an activist action or museum setting. Students were asked to focus primarily on the visual and material quality of the object and to think about how this affects the message behind the object—rather than just the message itself. The Case Study represented the research aspect of the history of the activist cause students addressed in their Object Analysis (e.g. BLM, environmental issues, LGBTQ rights, etc.). Their essay was to demonstrate how material/art objects were historically used to propel the cause.

With an Object Analysis and a Case Study, students then moved on to create an Action Plan for an event or intervention related to their topic. Subversive Action Plans might detail the plan for a protest, a boycott, a strike, a sit-in, a teach-in, a love-in, a happening, invisible theatre, a play, a book, a painting, a conversation, a daily practice, an occupation, a dance, a meal, a revolution, an insurrection, a movie, a concert, a song, a performance, among others. In addition to a document outlining the specific logistics of carrying out the action, students gave a 5- to 10-minute presentation summarizing their Case Study and outlining their Action Plan.

In their final projects, students articulated what kind of objects would be included in their Action Plan. For example, an undergraduate student named Jenna showed how hangers, abortion pills, informational pamphlets, and signs highlighted the protest at the Washington Monument in 1989 and the Women’s March in 2017. After listening to Jenna’s presentation, Rachael encouraged her to consider situating the hanger in the discourse of inequality. (See the relevant article in The Atlantic.)

The class appreciated Jenna’s use of informational pamphlets to provide various options for pregnant women, including adoption, rather than literature proscribing abortion. Jenna responded that the idea of her protest was about choice; therefore, she did not want to push abortion onto anyone that wasn’t sure about what action wanted to take.

In her final essay, Jenna reflected on the material culture of protest in her own words: “One hanger is small and insignificant, but a mass of people all carrying one each makes a big impact [. . .] By using hangers, we are showing that our protest is inclusive to all people, regardless of economic status.”

Itself being “a material entity, the human body is often used as an object of passive resistance as in the case of Rosa Parks, the sit-in against segregation at Woolworth’s lunch counter in Greensboro, North Carolina, or the occupation of the San Francisco offices of the Department of Health, Education and Welfare by disability rights protesters,” Rachael added. “People want to be heard, and words and actions are inevitably accompanied by things.”

Visit this page to learn more about Rachael Vause’s research. Her recently published article, “Grasping the Cross: Transforming the Body and Mind in Early Medieval England” can be found here.