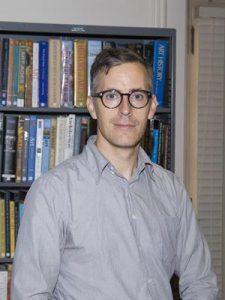 Professor Jason Hill specializes in the histories of modern and contemporary art, photography, and visual culture, focusing on American art’s longstanding and always dynamic relationship with the cultures of mass media and journalism. Jason received his Ph.D. in Art History at the University of Southern California in 2011, where he also completed the Visual Studies Graduate Certificate. He completed his M.A. in Art History at Tufts University in 2004 and his B.A. in Political Science at the University of Massachusetts, Amherst in 2001. Before joining the Department of Art History at the University of Delaware in 2015, Jason was 2014-15 Andrew W. Mellon Fellow at the New-York Historical Society and 2011-13 Terra Foundation Fellow at the Institut National d’Histoire de l’Art in Paris. He has also taught at the École Normale Supérieure, Sciences Po, Université Paris X Nanterre, and UNLV.

Jason is co-editor (with Vanessa R. Schwartz) of  Getting the Picture: The Visual Culture of the News (Bloomsbury, 2015), which assembles an interdisciplinary and international team of scholars to chart the shifting terrain of pictorial journalism from the early nineteenth century to the present, from the lithograph and wood-engraving to photojournalism and Flickr. The problem of visual journalism as a question of material culture is at the heart of this volume’s inquiry.  Jason’s forthcoming book, Artist as Reporter: Weegee, Ad Reinhardt, and the PM News Picture, draws on the analytical resources of both art history and media studies in order to illuminate the pragmatic value of modern art’s essential inquiry into problems of representation and medium in enriching the visual culture of print journalism in the 1940s, considering that newspaper’s full gamut of communicative forms from page-design, exhibitions, photographs, and maps, to diagrams and comics. Both of these projects engage Jason’s continuing commitment in understanding the productive place of art and its histories within (rather than against) modern culture’s more expansive visual field.