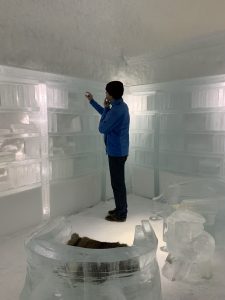 Lowell Duckert received his B.A. from Western Washington University (2004), his M.A. from Arizona State University (2007), and his Ph.D. from The George Washington University (2012). He specializes in early modern drama and travel literature, environmental criticism, new materialism (especially actor-network theory), and water studies. He has published on various topics such as glaciers, polar bears, the color maroon, rain, fleece, mountaintop removal mining, and lagoons. In general, his work attempts to reshape present-day relations between humans and nonhumans by plumbing premodern wet worlds.

His book For All Waters: Finding Ourselves in Early Modern Wetscapes was published by University of Minnesota Press in 2017 and was short-listed for the SLSA’s Michelle Kendrick Memorial Book Prize for the best academic book on literature, science, and the arts. With Jeffrey Jerome Cohen, he is the editor of “Ecomaterialism” (postmedieval 4:1 [2013]); Elemental Ecocriticism: Thinking with Earth, Air, Water, and Fire(2015); and Veer Ecology: A Companion for Environmental Thinking (2017). With Craig Dionne, he is the editor of “Shakespeare in the Anthropocene” (Early Modern Culture 13 [2018]).

He is currently researching two book projects that critically engage with contemporary cryo-politics: the first investigates the strange vitality of ice witnessed by sixteenth- and seventeenth-century writers of the north, while the second follows the compacted object of the snowball.