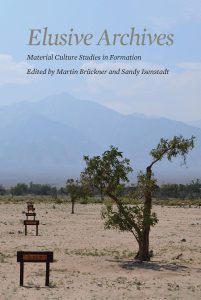 In their recently published book, Elusive Archives (University of Delaware Press, 2021), former CMCS co-directors Martin Brückner and Sandy Isenstadt ask how material culture is studied in today’s world. The volume responds to the foregoing conversations that re-framed our understanding of archives as dynamic and open to interpretation. Furthermore, it brings together scholars from diverse disciplines to explore how we study material culture when neither objects’ “material” nor their “culture” registers them as being worth or even amenable to collecting. In Elusive Archives, contributors examine objects across the times, ranging from a barnacle-encrusted motorcycle that crossed the Pacific Ocean to a suitcase from a WWII-era California internment camp. Despite the difference in their scholarly focus, the writers share a common interest in the ephemerality of objects. Through this, they aim to reconceptualize the idea of archives and update the traditional approach to learning about the past.

Elusive Archives is comprised of four sections, each of which takes a different viewpoint to explore how otherwise unrelated things might cohere into an archive. In the first section, “Archives in Practice,” Julian Yates focuses on the entanglement of animals and plants with human culture to talk about what should be brought into the archive. Wendy Bellion, in the following chapter, shares a story of her early days in the Smithsonian Institution’s Freer Gallery of Art and Arthur M. Sackler Gallery, while Julie McGee reflects on her negotiations with living artists and the families who later managed their objects. In her essay, Cindy Ott narrates how an unexpected encounter at a local Wyoming bar—a seemingly unlikely place for archival research—marked a turning point in her study on Plains Indian food culture. Laura Helton then leads us to the 1930s, the origin point of archival studies in American culture. In this chapter, titled “Historical Form(s),” Helton investigates how African American memory collided with the “archive fever” of the decade, marked by a heavy emphasis on reinforcing the nation-building narrative through archival research projects. From her analysis of the Black poet Robert Hayden’s works, Helton examines different ways of archiving ephemeral memories of black bodies.

The second section, “Archives in Objects,” gestures toward less tangible and finite objects. Jennifer Van Horn speculates the many possible trajectories of a missing portrait of the enslaved Homer Ryan, which is nowhere to be found in any museums or archives of early American portraits. Through the curious absence of the portrait, Van Horn asks readers to think about the problems of gaze and visibility. The following section, “Archives in Places,” features essays that highlight the spatial relationship contained within elusive archives. In her essay “Refuse, Relic, Refuge,” Sarah Wasserman writes about the methods of material culture studies to recognize the relationship between the people and their objects crossing borders. Lu Ann de Cunzo, on the other hand, gives the readers a glimpse of her study on how buried things, or incomplete testimonies of everyday objects, redirect our approach to documentation, conservation, analysis, and interpretation. The last section, “Archives in Circulation,” follows objects and things moving through landscapes and examines any factors that prevent their movements. Focusing on a letter written by Captain James Scott in the late eighteenth century, J. Ritchie Garrison discusses the tensions between archived texts, material culture, environments, and human control through a story of splintering tar barrels in the hold of a storm-tossed merchant ship Lydia. By conceptualizing the ship as an archive, Garrison underlines that archives are “patterned but imperfectly stabilized sets of relationships from which humans interpret fragments of evidence” (223). In addition, Michael Emmons looks at markings and inscriptions inside eighteenth-and nineteenth-century buildings in the Atlantic world while Jessica Conrad focuses on nineteenth-century temperance reformers’ attempts to prevent the circulation of alcohol.

As Bernard L. Herman observes in the Afterword, Elusive Archives “seek[s] the strangeness in familiar things and the familiar in strange things” (267). Taken together, this inaugural volume of Material Culture Perspectives aims to sharpen historical and critical questions regarding the formation, dissemination, consumption, and contestation of material cultures and their ideologies. Ultimately, the collective insights of the volume signal the emergence of the Delaware school of material culture studies. 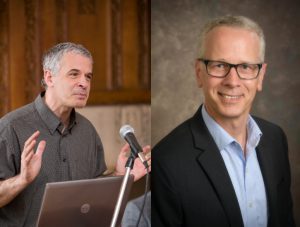 Click here to purchase a copy of Elusive Archives.