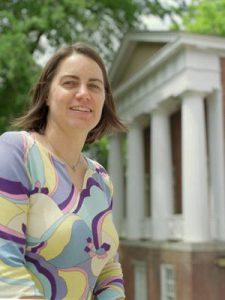 Lauren Hackworth Petersen, Professor, Dept. of Art History (Joint appointment in Women and Gender Studies), specializes in ancient Roman art and architecture. Her most recent book, The Material Life of Roman Slaves (co-authored with Sandra Joshel, Cambridge University Press, 2014), intervenes in scholarly debates on the archaeology of Roman slavery by searching for ways to see slaves in urban houses, city streets, workshops, and villas—to make slaves visible in the material remains where literature, law, and art tells us they were present. She is currently working on the archaeology of Roman religion and ritual, in addition to thinking about Roman cities and alternative narratives of their physical remains.

Professor Petersen’s research and teaching interests include art in the everyday life of ancient Romans, the visual and material culture of Pompeii, classical art revivals and their meanings, and ancient constructions of gender and sexuality.