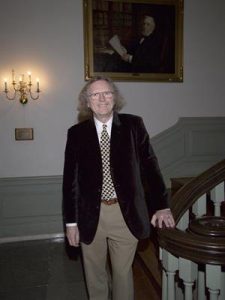 Lawrence Nees is a specialist in the art of the early medieval period, with interests focusing on the second half of the first millennium of the common era across the broad geographical range from Ireland to greater Syria. Although art historians do not always think of themselves as studying “material culture” as opposed to art, many, especially those studying post-medieval European and American art, do make this distinction. Medievalists generally do not, and never have done. Nees works extensively in both research and teaching with manuscripts, metalwork, ivory carving, textiles and other materials classified traditionally as “minor arts” rather than “fine arts.” His work is interdisciplinary, involving consideration of archaeology, palaeography, epigraphy, and also makes extensive use of theoretical and methodological approaches drawing from biological and anthropological studies.

Lawrence Nees has taught at the University of Delaware since 1978, where he is Professor in the Department of Art History, and Chair of the Department. His publications include, in addition to dozens of scholarly articles, the books From Justinian to Charlemagne (1985); The Gundohinus Gospels (1987), A Tainted Mantle: Hercules and the Classical Tradition at the Carolingian Court (1991), Approaches to Early-Medieval Art (1998); Early Medieval Art (2002), and Perspectives on Early Islamic Art in Jerusalem (2016), and is currently completing two other books. He has held fellowships from the Guggenheim Foundation, the National Endowment for the Humanities, and the Mellon Foundation, and residential fellowships at the American Academy in Berlin, the Institute for Advanced Study in Princeton, the Center for Advanced Study in the Visual Arts at the National Gallery of Art in Washington and the National Humanities Center.   He served from 2008-2014 as Vice-President and then President of the International Center of Medieval Art.