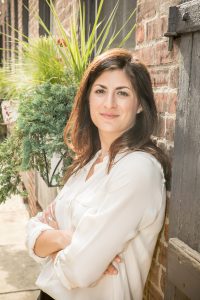 She earned her M.A. from the University of Chicago, her Ph.D. from Princeton University, and served as Assistant Professor at the JFK Institute of North American Studies in Berlin, Germany before joining the English Department at the University of Delaware.

Her first book, The Death of Things: Ephemera and the American Novel (University of Minnesota Press, 2020) examines literary representations of disappearing objects in American culture from the beginning of the twentieth century until today. Her scholarly essays appear in PMLA, Contemporary Literature, Post45, Oxford Online Bibliographies, Modern Fiction Studies, The Journal of American Studies, and Literature Compass, as well as in numerous essay collections. Her public writing appears in Los Angeles Review of Books, Public Books, and Flaunt magazine. With Patrick Moran, she curates the “Thing Theory and Literary Studies” colloquy on the Stanford Arcade website.

Her research has been supported by the Wolf Humanities Center at the University of Pennsylvania, where she was a regional faculty fellow for the 2018-2019 academic year.

Current projects include an edited volume, Modelwork: Material Culture and Modeling in the Humanities (with Martin Brückner and Sandy Isenstadt, forthcoming with University of Minnesota Press in 2021) and a second monograph entitled Digital Intimacy: American Love Stories in the Age of the Internet. It charts the effects of digitality on ideas of love and how they are represented in contemporary American and Anglophone fiction.